Block Quest is a decentralized fact-checking platform that focuses primarily on Blockchain/Web3 and Crypto. The platform is currently in private beta. We will announce when the public beta is launched.

2fa.news decentralized fact-checking platform is currently in the R&D phase and it is scheduled to be launched in Q1-2023. 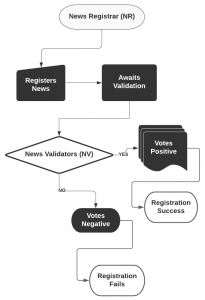 2FA News addresses news and content fact-checking in general, whereas Block Quest focuses primarily on the blockchain/web3 and the cryptocurrency industry.

The protocol mandates two-factor checking to validate news and its facts. The first factor uses News Registrars (NRs), and the second factor uses News Validators (NVs) to re-verify the facts and authenticate the citations/references attached by NRs. Both NRs and NVs will be rewarded with FACT tokens for their contribution.

The protocol allows NRs to appeal their failed registrations if they believe that the negative votes given by the NVs on their submissions are invalid. The appealed news/fact will go through the same validation process specified in the protocol, but only this time the new NVs will vote.

Following a successful appeal, the NVs’ initial negative votes become invalid, and any FACT tokens awarded to them for such votes are retracted, and the tokens are then distributed to NRs for the trouble caused.

Read the whitepaper to better understand the 2FA News’ fact-checking and appeal processes.

All validated facts from both fact-checking platforms are registered on the blockchain and/or hosted on web3 systems such as IPFS for tamper-proofing, archival, and censorship resistance. The blockchain articles published by the protocol are permanent and taking them down is impossible.

Want to contribute to Fact Protocol? Get in touch with us.